A woman who faced wars and bigotry, but gained success: Muntaha introduces herself

elbarlament’s Women Talking Peace project, funded by the GIZ, aims to support women in acquiring leading roles in political or civil society organisations, institutions and peace processes in Iraq. This is the story of Muntaha, one of the project participants. 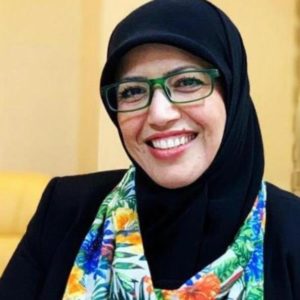 Muntaha Ghazi was born in 1981 in the Iraqi village of Al-Daraji belonging to the city of Samawah, during the Iran-Iraq War. Her family actually lived in the city of Nasiriyah-a city in which she would later become a government advisor- and was visiting relatives at the time. Muntaha spent her childhood away from her family, growing up in the village she was born in. This had an impact on the development of her personality and made her a stubborn and independent child. It is, however, thanks to these traits that she was also one of the best students in her school.

Muntaha moved to Nasiriyah to attend middle and high school, and completed her university studies at the Faculty of Civil Engineering of Basra University. Upon graduating, she decided not to work as a government employee but in the private sector, gaining practical experience on engineering sites.

Working as a woman engineer in Iraq

Muntaha was often faced with difficulties in her professional life due to her gender. She recalls being invited in 2006 for a job interview with a company in the city of Nasiriyah. When she arrived at the place of the interview, she was surprised to find out that all other applicants were men. She was even told that they were looking for a male and not a female engineer. Muntaha smiles whenever she recalls the confident way with which she answered them: “You announced that you were looking for an engineer and did not specify whether it had to be a male or a female.” Muntaha not only conducted the interview; she got accepted and managed a project for two years. This was just the start of Muntaha’s career.

One day, a company belonging to the coalition forces was working on aerial detection. Muntaha’s project caught their attention, and they offered her a job. After that, she was promoted, ultimately becoming a team manager. Later, she learned from her colleagues that prior to her joining their team, they had never thought that there were any women working in this field.

She also recalls the astonishment of US embassy officials when she applied for a tourist visa, and not a visa to escape a threat. Back then they were only granting a visa to those in danger. In the end, she got the visa and visited the US for the first time in her life.

Although she tended to remain passive in situations that bothered her (perhaps because of society’s judgment and fear of its outlook), she felt resentful. She had difficulty dealing with people and was silent in situations where she was supposed to speak up. Muntaha remembers how she once decided to challenge herself while waiting for the elevator during an official mission in the General Secretariat of The Councils of Ministers in Baghdad. A high-ranking official and his escorts were also there. When the elevator door opened and they prevented her from entering, she walked in against their will and said: “You don’t have the right to do this”.

How Muntaha benefited from the Women Talking Peace project

Muntaha came across the “Women Talking Peace” programme by accident and chose to participate in workshops on dialogue, negotiation skills and conflict resolution.

Before joining the programme, she only had the courage to start a dialogue with others in the context of work. Thanks to the workshops she attended, she made a lot of acquaintances, her interests expanded, and she now feels able to start a conversation with any group of people, no matter how different their opinions are. She recalls what she told the participants in one of the online workshops: “I think that women need to train themselves. I think that Iraqi women isolate themselves from people, because this is what they have learned through the culture of society that imposed that.”

Thanks to the project, Muntaha got acquainted with many women from different religions and Iraqi governorates. They became friends with whom she communicates on a regular basis. She felt at peace within this project, as it was run in a relaxing atmosphere that she had never experienced before. She has changed from someone who leads in the workplace only, to a social figure outside of work as well.

As for the impact of the “Women Talking Peace” program on her professional development, Muntaha says that the program was an opportunity to learn to listen to others, which contributed to her current success as an advisor to the governor of Nasiriyah in investment affairs. Indeed, while participating in the project, Muntaha started working – on an independent basis – with the government sector. She also volunteered with the group that worked on the file of inscribing the Iraqi marshes on UNESCO’s World Heritage List. This experience allowed her to gain knowledge on how to best communicate with the government and civil society as well as to test and find the life and work style that best suits her.

She believes that a large part of society’s problems lies in not listening to others. Sometimes people have no personal enmity with others, but they do not know the best way to express their problem. That is why she always urges her colleagues: “You have to understand people. This is your responsibility, the citizens are your responsibility as well. When you are in such a position, you have to accept all people regardless of your opinion and mood.” At a conference about investment in the city of Sulaymaniyah, Muntaha shared her opinion regarding investment laws in Iraq, saying: “The employees’ mood cannot be a factor in how we apply the law. Decisions and other matters are sometimes hindered because employees do not assume their responsibilities.”

Here is Muntaha’s advice to any woman who reads her story: “A woman should not allow herself to hate, but should love herself and love people, listen honestly, train and develop herself, and remain real, to contribute to the success of others through her own success.”