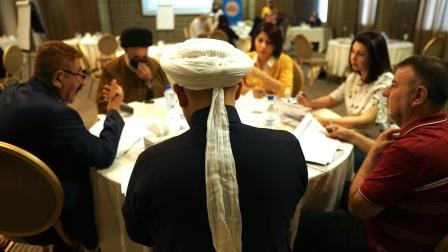 Religious, tribal, and women leaders can play a role in maintaining societal peace in Iraq. In spring and summer of 2021, elbarlament organised the two-part training course “Social Cohesion between Iraqi Communities – A Dialogue with Tribal and Religious Leaders” in Erbil, the capital of the Kurdistan Region in Iraq.

Religious and tribal leaders with female activists in joint training

Two groups joined the training: on one hand, Iraqi religious and tribal leaders, and on the other Iraqi female activists. The main objective was to initiate a dialogue and to increase cooperation in peacebuilding efforts by creating trust between these two groups. Elbarlament adopted an unusual approach by first separating the two groups and then bringing them together in the second workshop, with great success.

More specifically, 15 leading female figures from different Iraqi provinces and 15 leading figures from tribal sheikhs and clerics joined. Several themes were addressed, including the impact past conflicts have had on both men and women in Iraq; the United Nations Security Council Resolution 1325 concerning women, peace, and security, as well as Iraq’s position on this resolution. Moreover, the training addressed the first and second Iraqi national action plan (INAP), and the role of religious and tribal leaders in implementing it.

More concretely, discussions revolved around the reasons behind the conflicts in Iraq; the importance of nonviolent communication in managing these conflicts, and on the role of the Iraqi government, women, and religious and tribal leaders in resolving conflicts and promoting peaceful coexistence. Participants also examined the concept of pluralistic and inclusive citizenship. In addition, they talked about how to increase mutual trust and social cohesion, recognising the failure of Iraqi societies to address this issue.

During the training, both trainers as well as participants underlined the importance of sharing knowledge, skills, and experience in peacebuilding. Women’s important role in putting pressure on governments to implement international commitments was emphasized. In addition, participants focused on integrating ‘gender’ in all United Nations reporting systems and on the mechanisms of implementing these programmes.

Why such trainings are important

Trainings like this one help shape women leaders who defend their rights, speak confidently and can therefore put pressure on authorities. Moreover, as one of the trainers stated, bringing together community and religious figures in one place and in the same training course was essential, since they all continuously deal with each other, participating in tribal or local reconciliation processes. They have a big role to play, being considered leading figures in their local communities. Thus, they have the crucial task of influencing Iraqi society as a whole. Such a meeting gives participants the opportunity to exchange their viewpoints, encouraging negotiations that eventually culminate in concessions from all parties. This promotes peaceful coexistence.

The training underlined how important peaceful cooperation and community coexistence are for the largest possible number of minorities, religions, and nationalities. Working together, they can agree on how to implement the national action plan as well as on the role of each of the participating groups. If efforts are successful in creating leaders and in allowing them to thrive in a particular religious or national society, it will be possible to develop that society as a whole.

This training was organised as part of the Women Talking Peace project. For more women empowerment projects organised by elbarlament, please click here.