After decades under military and pseudo-civilian rule, in 2011 Myanmar finally began opening up politically. Democratic elections took place in November 2015, in which Nobel Peace Laureate Aung San Suu Kyi’s National League for Democracy won an overwhelming majority. A new chapter in Myanmar’s history was going to be written.

We were there to support the democratisation process, assisting the new members of Myanmar’s national parliament (Hluttaw) in developing the institution’s public relations and outreach strategy. Next to providing the Burmese staffers of the two parliaments with political and technical advice, elbarlament – cultures of democracy developed and shared ideas for public information and civic education. During workshops and a study tour for high-ranking staffers of parliament to the German Bundestag in Berlin, the participants got to know each other, found inspiration and gained new knowledge needed to address the manyfold challenges involved in building a functioning and democratic parliament in Myanmar.

Moreover, elbarlament’s Dr. Birgit Laubach contributed to the workshop of the Konrad Adenauer Foundation, the Mon-State Parliament and the National Enlightenment Institute on Federalism and Strategic Planning of the Regional Parliament in Mawlaminye, which was attended by 80 Members and speakers of the regional parliament, candidates and representatives of civil society organisations.

Find out more about the project in the video.

The project was funded by German Federal Foreign Office. 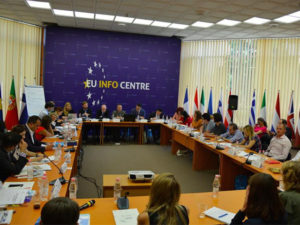