Creating and growing as a writer in times of conflict: an interview with a former participant

Shaimaa Al Hammami from Najaf, Iraq, teaches at the Medical Technical College, and also works as  TV presenter of cultural and health programmes and is an avid writer, though she still hesitates to call herself a professional writer. Shaimaa participated in our creative writing workshops from  2016 to 2018, as well as our Train the Trainer workshops in 2019. We sat down with her to discuss her experiences as a female writer in Iraq, and how art can contribute to peacebuilding and healing during and after a conflict.

How did you hear about elbarlament’s writing workshops?

Through a friend. Three years ago we began to participate in the writing workshops conducted by elbarlament. I benefited a lot from these workshops in terms of the technicalities of writing as well as in terms of personal growth and development.

How exactly have the writing workshops influenced your professional and personal life?

The Najaf province is known to be more close minded and as a place where women cannot move freely and independently. So professionally speaking, the workshops allowed me to become more self-confident and courageous, and I was able to rely on myself. The certificates that I received from elbarlament, especially from the Training of the Trainer workshops, enabled me to develop my own writing workshops in the provinces of Najaf and Karbala. These workshops were not exclusive to women, but were instead intended for both men and women. Personally, whereas a few years ago I used to be more reserved, especially during discussions, I can now assert myself, regardless of the other person’s social position. During the three years of taking part in writing workshops, I gained a stronger personality.

What is your assessment for the future of women writing in Iraq?

In your opinion, what are the societal and structural changes that must happen for the voice of women to be heard in Iraq and other countries?

In Iraq, more acceptance is needed. Acceptance of strong women with pens and voices that deserve to be heard; women who speak with confidence. Acceptance is needed from all social groups. So women should not just be accepted as capable writers by men, but also by other women. It still happens that some women will disregard or openly oppose a female writer simply because she is educated and self-confident. So the support and acceptance from society is crucial.

Structurally, women should receive both moral and material support, and be able to improve their craft or facilitate trainings for other women. This is because writing is not an easy task and requires publishing and editing capabilities among other things. This is very difficult in Iraq, it might be easier elsewhere.

How can writing be useful to the writer in times of conflict?

In times of war, a professional female writer can use her ability to innovate and create. Especially in Iraq, which has gone through so many terrible conflicts and wars, and the hardships that women have had to endure here, can be processed through creativity. Writing will greatly benefit the female writer because we innovate when we go through difficult experiences. Women should know that they do not have to be in a privileged or wealthy position in order to be a writer, but rather, that they can be creative even with the hardships that they experience.

Especially during the mass demonstrations  in late 2019, Iraqi women wrote poems and stories that reflected the difficult things that they were experiencing and that they were witnessing. This highlights their creativity.

How can the audience benefit from this?

The audience can benefit from the writer’s genuine reflection of reality that needs no exaggeration. In Najaf, an unknown female writer wrote an anonymous poem, because her family did not want her name to be recognised. Her poem resonated with the audience and stirred up a demonstration. This shows how much her words affected the audience and provoked their need for freedom. Evidently, a woman can communicate an idea, a goal, or a message to the public.

What are the challenges or opportunities you have faced since the beginning of the Coronavirus pandemic?

When the pandemic hit Iraq, my profession required me to take care of Covid patients. But I was still able to visit the library that I normally go to, and I even began going there more often because I, like other writers, have more time now since everything shut down. I know of other writers who began writing on topics that they had been meaning to cover but never had the time to do so. It seems everyone is working on a project that they have been previously putting off and for me, despite being affected by the virus, I tried my best and the newfound inspiration has helped me deal with the effects of the entire situation. 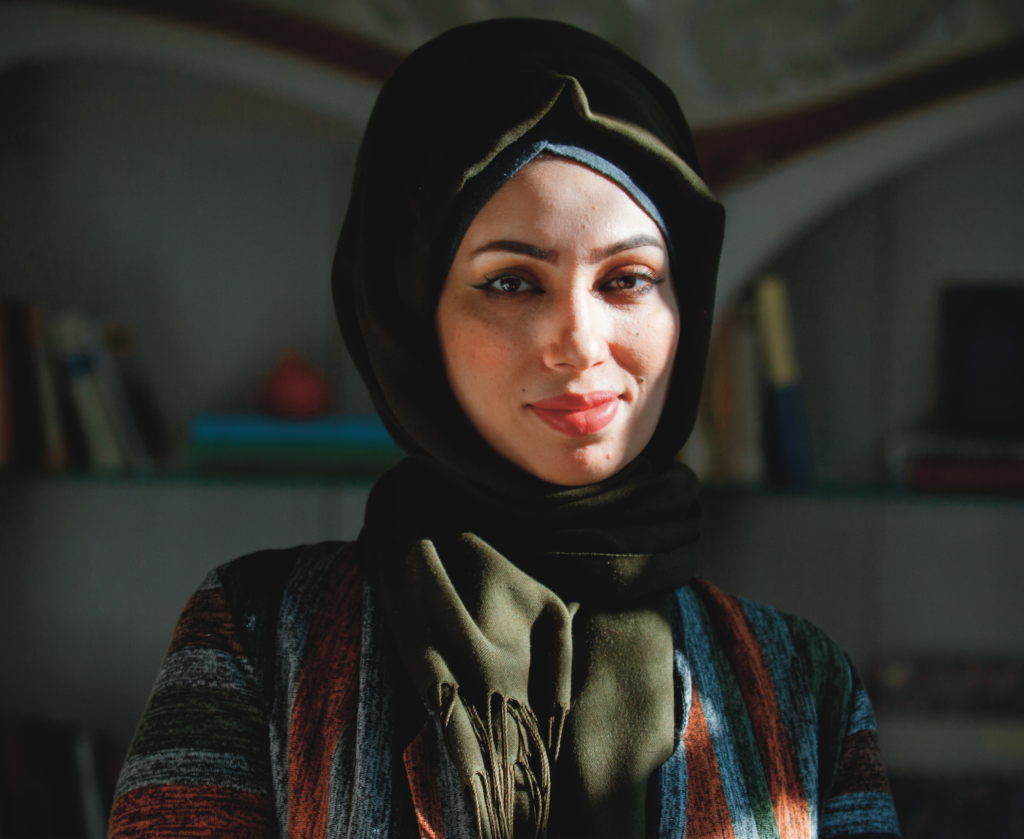 The project “Cultural Initiatives for Civil Society in Iraq 2019”, was funded by the German Federal Foreign Office.