Since we published our last blog post on Lebanon in November 2019, the situation of Syrian refugees in the country has further deteriorated, with the Lebanese government intentionally making life harder for this vulnerable group. Lacking any prospect of settling permanently in Lebanon or indeed of one day being able to sustain themselves independently and living a decent life, Syrian refugees are faced with a constant threat of detention or deportation to Syria.

With the outbreak of the Covid-19 pandemic, the situation has become even more dire for the refugees. According to Human Rights Watch “at least 21 Lebanese municipalities have introduced discriminatory restrictions on Syrian refugees that do not apply to Lebanese residents as part of their efforts to combat COVID-19”. Among these restrictions are curfews that restrict the movement of Syrian refugees to very limited daily time slots, as well as full lockdowns in some of the refugee camps to the effect that the people living in these camps can no longer go to their places of work, get financial assistance from aid organisations, or even visit a doctor. The results of this lockdown policy could be seen a few weeks ago, when a video surfaced on the internet in early April that shows a Syrian refugee burning himself after losing any means to support his family. It was reported by Al Jazeera that the refugee died after the incident.

The aforementioned challenges are even more gruelling for women living in the camps who, since the beginning of the pandemic and the resulting lockdown measures – and like women all over the world – have been suffering from increasing domestic violence, intimate terrorism and exposure to different kinds of abuse and harassment, while at the same time lacking any access to safe spaces and support from international organisations. In the Bekaa valley where elbarlament is currently implementing a leadership capacity building project with Syrian and Lebanese women, and where the highest percentage of Syrian refugees are living, women were suddenly stuck at home and lost access to protective services in the event of harassment or abuse.

Many organisations in Lebanon that work to prevent and counter domestic violence have spread their hotline numbers widely for women to call in case they are the victims of any form of violence. And while many organisations reported an overall increase in the number of women reporting abuses, the number of Syrian refugees among the callers has decreased drastically. According to Kafa Association, before the pandemic, the number of Syrian women who contacted the Kafa Centre in Bekaa or called the support hotline constituted 45% of the number of women who visited/called the centre. After the start of the pandemic, only 6 out of 22 refugees who used to have regular contact with the centre remained in touch and reached out for support, with all of these 6 women living outside of the refugee camps, thereby having a relatively better living situation than Syrians living in the camps.

The reason for the low number of calls from Syrian refugees can be attributed to several reasons, with the fact that these women are stuck in their homes and surrounded by family members being at the top of the list. If any of the women made the decision to report an abuse, she would face several negative consequences, which might range from community shaming to stigma to losing her children or, in the worst-case scenario, her life. Not to mention that many of these women are economically dependent on their spouses, so taking the decision to denounce a violent husband will probably engender a worsening of the woman’s socio-economic situation.

Our Lebanese partner organisation Women Now recently released a report on the “The disproportionate impact of Covid 19 crisis on women and adolescent girls in middle Bekaa and Women Now for Development’s response”. This report summarises and analyses the answers to a questionnaire that had been circulated among 55 Syrian refugee women in the middle of Bekaa. About 40% of women in the studied sample had recently lost their job due to the Covid-19 pandemic, which can be considered a good indicator of the deteriorating economic conditions not only of the women, but also their own and other families in the study area, especially since 40% of the respondents were the breadwinners in their families. Not to mention that, as a (female) Syrian refugee, remains very challenging regardless of the impact of the pandemic, given the discriminatory labour law, which restricts Syrian refugees to work in only of 3 sectors. Furthermore, the current health and economic crisis is causing additional suffering, which are summarised in the following extract from the report: “When we asked the sample whether the crisis had a direct negative impact on their economic situation, 96 percent of them answered with yes, and they attributed this influence to the crazy increase in prices and the changing exchange rate of the Lebanese pound against the USD if available by banks or in the black market, as well as losing jobs or the drop in income if it still exists at all”.

How increased female participation and leadership can help

elbarlament, together with our partner organisation Women Now for Development, has been working in Bekaa valley since 2018 in a capacity building project with Syrian – and since 2019 also Lebanese – women. Since the beginning of the lockdown, elbarlament and Women Now have kept the training workshops going through online platforms, managing to keep the rate of the women’s participation at 90% or higher. We believe that the continued connection with our participants is creating a space for women to share their experiences and develop solidarity among each other. In addition, by encouraging regular exchanges and networking beyond the training workshops, together with the participants we are working on creating a safe space that they can reach out to if they need support.

We recently met with Fatima from Syria, an alumni of our leadership programme from 2019. She is now a founding member of a campaign against child marriage, in addition to being an active participant in the campaign “16 days of activism against GBV (gender-based violence)” organised by Women Now. We asked Fatima what she thought about initiatives like our leadership programme, in particular how they can be beneficial for women in difficult times like this. She told us that the leadership programme has been very useful for her personally, as she learned many tools that helped her in supporting other women that experienced domestic violence. She explained to us how she tried to pass on some of the technical skills she acquired through our programme, like non-violent communication, mediation and conflict management, and how these skills can have a positive impact on her life as well as the lives of other women: “We are using the skills we acquired from the leadership programme in our campaigns to reach out to more women and transfer the knowledge. These days we are focusing on non-violent communication as a means to reducing domestic violence in the homes.”

We also spoke with Anas Tello, Advocacy and Communication officer at the Women Now center in Bekaa. He told us about the importance of the workshops, and how the participants can reduce many different types of abuses that they might be exposed to, using the skills they acquired from these workshops. He also explained how these women gained the ability to resist violence, especially if it comes from the outside. For example, from the person responsible in the camp, or a representative of the municipality, or a service provider. Thanks to their participation in the programme, the women know how to report any incident of violence because they have more connections and wider networks and can get through to other individuals in the society. “Participants break out of their private spaces into the public space and become leaders in their own societies, as they have acquired news skills and knowledge and learned how to reach out to others and to communicate their needs effectively”.

elbarlament and Women Now are committed to continuing our work in support of women in the Bekaa area, conducting online workshops and building and maintaining strong bridges with our participants. In the meantime, we are preparing for the time after Covid-19 when we will resume in-country activities with our trainers and participants, which after all, remain the most effective approach to supporting capacity development and facilitating networking and joint action. 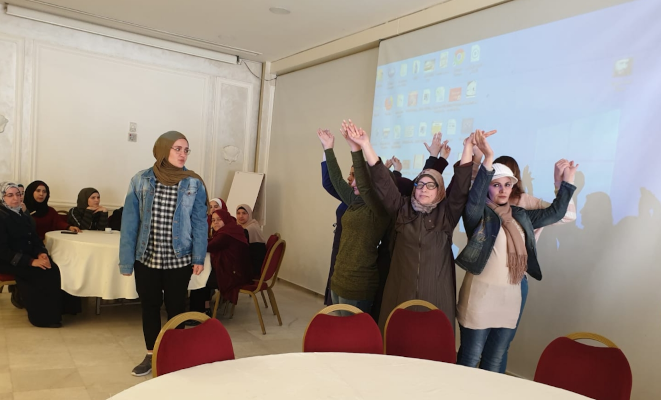 The project ‘Women Take the Lead’ is supported by the ifa (Institut für Auslandsbeziehungen) programme “zivik”, with funds from the German Federal Foreign Office.