After decades of wars and insurgencies, as well as the most recent occupation of territory by the so-called Islamic State (IS), Iraq is still struggling to move towards lasting peace and stability, while also addressing pertinent issues such as the prevalence of active IS sleeper cells, internal displacement of hundreds of thousands of people and the consequences of enslavement and rape, particularly of Yesidi women.

Furthermore, high rates of corruption and a lack of infrastructure have led many Iraqis to distrust government institutions. Nevertheless, a strong civil society continues to keep issues such as women’s rights, the rule of law and social justice on the map. Given these obstacles and opportunities, how can Iraq achieve stability, and what role can cultural projects play in overcoming the consequences of war and in reconciliation processes? elbarlament specifically addressed this question in a recent study.

Motivated by new insights into the cultural scene in Iraq gained through this research, elbarlament hosted a panel discussion on 4 July 2019 at the taz Kantine in Berlin that focused on the realities of Iraq in 2019 and the role of culture and the arts in addressing political, religious or ethnic conflicts. The panel consisted of Susana Abdul Majid, an actress with Iraqi roots who is currently part of Milo Rau’s play “Orestes in Mosul“, which combines the Greek tragedy with the recent presence of IS in Mosul, Sebastian Bloching, co-author of the study “Cultural work against the consequences of war – a snapshot from Iraq”, Andrea Böhm, journalist with many years of experience reporting on Iraq and the MENA region for DIE ZEIT, and Alisha Molter, coordinator of elbarlament’s project “Women think Iraq anew“.

The study “Cultural work against the consequences of war – a snapshot from Iraq” is available for download here.

The event was a part of the project “Women think Iraq anew – elbarlament in Iraq 2019“, which is supported by the ifa (Institut für Auslandsbeziehungen) programme “zivik”, with funds from the German Federal Foreign Office. 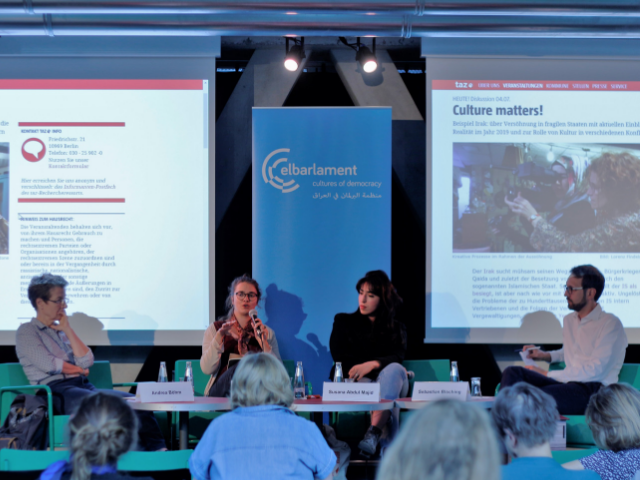